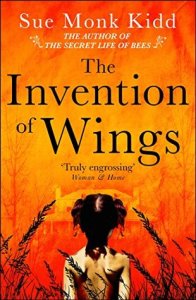 This was a buddy read with Kriti, our third of the year. We were originally planning to read a different book by Sue Monk Kidd, but we ultimately chose this one and I am really glad we did. Thank you to Kriti for some very deep and thoughtful discussions!

Sarah Grimké is the middle daughter. The one her mother calls difficult and her father calls remarkable. On Sarah’s eleventh birthday, Hetty ‘Handful’ Grimké is taken from the slave quarters she shares with her mother, wrapped in lavender ribbons, and presented to Sarah as a gift. Sarah knows what she does next will unleash a world of trouble. She also knows that she cannot accept. And so, indeed, the trouble begins.

Inspired by real events, this is the fictionalised story of how Sarah and Angelina Grimke became two of the most influential and notorious women in the United States in their campaign to bring an end to slavery.

This was an eye-opening novel that uses a deft combination of fact and fiction to tell a vivid, highly emotive story. With two beguiling narratives that showcase extraordinary character development over the course of a 35-year timespan, it provides a raw and detailed exploration of some immensely powerful topics that inspire and horrify in almost equal measure.

What made this a particularly fascinating read was the fact it is semi-biographical, depicting the life of anti-slavery campaigner Sarah Grimke and her sister Nina, with the aid of a fictional sub-plot. As a result it became something very enlightening, for despite the impact these two women made in that era against all the odds, their names are not widely known and so I am grateful that this book gave me the opportunity to learn about them.

The story begins in 1803 when Handful, a young girl, is taken from the slave quarters at the plantation where she works, and presented to Sarah by her parents as a gift for her eleventh birthday. Sarah, totally repulsed by slavery and the barbaric events that take place in her household, fights strongly against the idea of owning Handful but is ultimately forced to do so.

In the years that follow, the two develop a close friendship and Sarah explores other ways of railing against slavery, also teaching Handful to read, and promising her mother Charlotte that she will try and set her free. Sarah is forced to abandon hopes to become a lawyer and instead becomes godmother to her younger sister Nina, who goes on to develop the same beliefs and takes a more proactive stance.

That is the general premise, and from there the plot takes many different paths, following Sarah as she leaves home and finds her voice, becoming a prominent activist after being joined by Nina. Meanwhile, equally compelling events take place in the fictional life of Handful, who sees her mother disappear very suddenly and then goes on to take part in a slave revolt.

A lot of things happen over the course of the book, and along the way it deals with an abundance of moving themes that are explored in profound detail. The first of those is of course slavery and racial inequality, and that is handled extremely well with a very poignant and effective portrayal, although unsurprisingly some moments made for difficult reading.

The other major theme is gender inequality, which is a constant factor and provides an ongoing obstacle to Sarah throughout her story. All hopes of becoming a lawyer are cruelly dashed by the lack of prospects for women, and she initially feels hopeless only to then discover a new purpose in life and refuse to conform to the pitifully low expectations of the time.

It was wonderful to watch her grow from a stammering young girl who felt unable to make any difference in the world, to someone that risked everything to fight against widespread injustice and actively campaigned to bring an end to slavery. She took a lot of interesting steps along this journey, and the outcome it brought was greatly inspiring. That is where the book’s title originates.

I was totally absorbed by the plot to begin with and it held my attention all the way through, but it did lose some of its fluidity around the halfway point where the pace slowed down a little. Despite that, everything was more or less good until the final part, which just felt awfully rushed. I would have loved to have seen more of the impact of Sarah and Nina’s work as they travelled across the United States and gained notoriety, but it was mostly glossed over in favour of fairly broad descriptions.

The book is written exclusively in the first person, with each chapter alternating between the perspectives of Sarah and Handful. I connected with both of them right from the start and that really allowed me to feel really invested in the story, appreciating how the author gave them such depth while delivering a noticeable contrast in their respective tone. Though a real person, Sarah was truly brought to life within the pages and the author’s extensive research was clear to see.

Handful’s sections are told in such a way that it feels like you are experiencing events through her eyes, giving them that added degree of impact. She is a complex character and that is reflected in her interactions with others and how her general outlook evolves over time, but later on in the book there seemed to be greater emphasis placed on Sarah’s storyline.

The secondary characters also bring a lot to the story. I really liked Nina for her rebellious nature and everything she stood for, while Charlotte was so daring and unpredictable that I was never sure what she was going to get up to next. Then we have Missus, who was callous and calculating but far from one-dimensional, and the larger-than-life Denmark Vesey.

There are various settings visited in the book, but the main one is definitely the Grimke family’s plantation. It felt frighteningly oppressive at times because of terrible lives the slaves endured there, but it also came across as somewhere that held hidden secrets, such as the roof terrace where Sarah and Handful drink tea together as children, and the quilts where Charlotte concealed items of sentimental value.

One of the most impressive aspects of this book was the quality of the storytelling. The writing style is not especially descriptive or flowery, but all the words just flowed together very nicely and it made for an engaging read. In amongst that, the best and most eloquent lines centred around the themes, many of which I highlighted on my Kindle.

Overall, this was a moving and superbly written book that used many interesting angles to tell the story of two women, one real and one fictional. Their narratives were both hugely immersive and with the exception of a rushed ending, it was very well crafted and had a convincing historical backdrop. Yet it was the themes and the journeys the characters embarked on that provided the most abiding memory.

Sue Monk Kidd graduated from Texas Christian University in 1970 and went on to study creative writing at numerous other institutions, eventually turning to fiction and winning awards in the late 1990s.

She published her first novel, The Secret Life Of Bees, in 2002, which won a multitude of awards and was developed into a film adaptation. It also spent two and-a-half years on the New York Times bestsellers list. The Mermaid Chair followed a few years later, also to considerable success.

The Invention Of Wings was released in 2014 and was selected for Oprah Winfrey’s book club 2.0, receiving widespread acclaim. Her latest novel, The Book Of Longings, was published in April 2020.

A poignant and powerful book, I loved the dual narratives and was swept away by its semi-fictional story and the impressive way it dealt with sensitive topics.