I am extremely excited to be part of this rather humongous blog tour for the smart and twisty YA thriller that is The Inheritance Games. Thank you very much to Dave @ The Write Reads for his meticulous organisation, and for the beautiful free physical copy!

My anticipation for this book was heightened by how much my fellow bloggers seemed to love it. Did it captivate me in the same way? Read on to discover my thoughts… 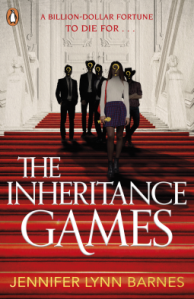 Avery has a plan: keep her head down, work hard for a better future.
Then an eccentric billionaire dies, leaving her almost his entire fortune. And no one, least of all Avery, knows why.

Now she must move into the mansion she’s inherited.
It’s filled with secrets and codes, and the old man’s surviving relatives –
a family hell-bent on discovering why Avery got ‘their’ money.

Soon she is caught in a deadly game that everyone in this strange family is playing.
But just how far will they go to keep their fortune?

With the combination of a fiendishly complex mystery and a seemingly endless amount of clever ideas, this is a book that radiates uniqueness. Taking place within a majestic setting and told at a brisk pace which barely relents, it enthrals with a plot containing several unexpected twists and turns, along with a colossal compendium of sophisticated puzzles.

The story makes full use of its fanciful yet super intriguing concept, bringing together a large and enigmatic group of characters whose motives are skilfully concealed until the last. There were some things which could have been explained better and perhaps one or two elements that felt unnecessary to the plot, but generally it was unpredictable and as the end approached, increasingly gripping.

Avery Kylie Grambs appears to be a teenage girl like any other, living with her older sister Libby and trying her best to get the grades she needs to fulfil her ambition of becoming an actuary. But then she is summoned to the school office and told that she been named as a beneficiary in the will of recently deceased multi-billionaire Tobias Hawthorne, who was one of the richest men in the United States.

Along with Libby, she is taken to Hawthorne House, the gigantic mansion where the family lives. After meeting Tobias’ four grandsons, Avery arrives in the Great Room for the reading of the will, and is shocked to learn that she has been left almost the entire fortune. The only problem is, she has never even heard of Tobias Hawthorne and does not recall ever meeting him.

Suddenly an instant celebrity, Avery now wants to discover why she was chosen to inherit the estate, but so does everybody else. The answers lie at the end of a trail of obscure, hidden clues that the billionaire left scattered throughout Hawthorne House before he died, and once she starts playing the game, she finds that she cannot stop. The four grandchildren, Nash, Grayson, Jameson, and Xander, are right at the centre of it, but it is unclear how and why. It becomes apparent that a tragedy that took place the previous year could be the key to unlock the mystery, but as her life comes under threat, Avery is unsure who she can trust.

Although it took a little bit of time for me to get my head around the story and its numerous characters, I was always fully on board with the concept and as things progressed it eventually became very difficult to put the book down. The puzzles became more elaborate, all the residents of the Hawthorne estate come under varying degrees of suspicion, and the twists begin to arrive with breathtaking frequency, with the most shocking of all saved until last.

Along the way, it was clear just how much thought went into this book. The clues take the form of subtle hints, anagrams, or pieces of information which seem at first to be mildly interesting yet minor details, only to assume great significance later on. Similarly, there are several lines of dialogue that contain carefully disguised meaning, so it is important here to pay attention to every word and keep a completely open mind.

The central mystery revolves around why Avery was chosen to inherit the Hawthorne estate, but many sub-plots also emerge. It could have turned out convoluted, but in the end I was really impressed by how the various strands intertwined and the way they added to the tension. Indeed, the only element which I felt was slightly misplaced were the signs of potential romance. It was not developed enough and it just felt out of keeping with the main focus of the book.

With the exception of the final three pages, the entire story is told in the first person from Avery’s point of view. In doing so, it superbly conveys the confusion and disbelief that she feels upon receiving the inheritance, and her understandable struggle to come to initially come to terms with having such a crazy new life. Her perspective also helped to further pique my curiosity and really engage with the plot, as she followed all the breadcrumbs laid out for her by Tobias Hawthorne.

Avery is a very quick learner and has a shrewd, analytical mind which made her a reasonably likeable protagonist. If I were to inherit such a large amount of money in such circumstances, my reaction would probably be more or less the same, so on that basis I found her relatable. That said, I wish she could have been developed just a little more, and her on/off attraction towards Grayson and Jameson did not always make a great deal of sense.

Even from beyond the grave, Tobias Hawthorne is a fascinating character and we gain regular insights into how his mind worked. They arrive mostly through his grandsons, all four of whom are multi-layered and have extremely complex personalities. Having been overlooked for the inheritance in favour of Avery, there is never a moment where you can entirely trust any of them or be precisely sure of their motives.

Nash came across as overbearing and I felt sceptical of him early on when he says that he is not interested in the money, which seemed like it could be a very convenient lie. For me, Xander was the most charming due to his laid-back personality and love of scones, but of the quartet, it is definitely Grayson and Jameson who share the most compelling dynamic.

Grayson is well spoken and openly resentful of Avery, while Jameson is merely intrigued by her and becomes just as determined to find all of the clues as she is. There is a lot more to both of them than what appears on the surface, and by the end you get to see them in a different light, although sometimes I had to remind myself that they are teenagers. For some reason, they were made to feel a few years older.

Things get even more interesting when characters such as Thea and Rebecca are added to the mix, and I was really keen to discover what they knew. I liked Alisa, especially when her mask of cool professionalism slipped and she voiced her feelings, while Libby is kind and caring, and I was absolutely willing her to escape her abusive boyfriend Drake.

I had serious problems however with Drake’s role in the book. He only physically appears right at the beginning, but then continues to play an important part without being given any real development. I was left wondering what his intentions really are. The other character that I had issues with was Max. Her way of speaking became tiresome from a very early stage and she does not show any personality until past the halfway point.

All the same, the positives outweighed the negatives and one of the major highlights was the setting. Hawthorne House is the perfect place to explore; a vault of secrets containing, among other things, five libraries, a bowling alley, a vast climbing wall, and countless hidden passageways. I loved discovering each and every new room within it.

The ending is unpredictable as anything and it is basically one twist after another. To be honest I was slightly underwhelmed by the real reason Tobias Hawthorne changed his will and left almost everything to Avery, but the next revelation soon makes up for it. It made me a bit speechless and certainly provided the cliffhanger that ideally sets up the sequel.

Overall, this is an exciting and fast paced read, full to the brim with ideas and wonderful imagination. There are a lot of characters and events to keep up with and it will constantly keep you guessing with a mystery that gathers thrilling momentum with each passing clue. It is a story with plenty more still left to unravel, so I am really looking forward to finding out more.

Jennifer Lynn Barnes is a prolific author of young adult fiction, writing more than a dozen novels including Little White Lies and The Lovely And The Lost. Also a professor of psychology and professional writing at The University of Oklahoma having received a PhD in 2012, has been writing for as long as she can remember. Very multi-talented!

The Inheritance Games is her first book to become a New York Times bestseller, and I am glad that this blog tour can possibly claim to have helped a little in achieving the success she deserves. 🙂

While there are some flaws and a lot of ideas crammed in, this is a very enjoyable book with huge attention to detail, fascinating characters and settings. A page-turner for sure!

*I received a free advanced copy in exchange for an honest review.

Check out the thoughts and reviews from all of the other amazing bloggers on this tour!