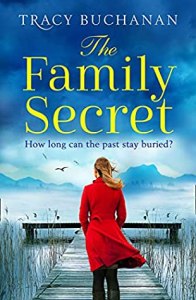 Since Amber lost her child ten years ago, her sole focus has been keeping her small business afloat. Her life seems to be on hold, until the morning she finds a girl on the beach outside her gift shop. A girl who has no shoes, no name, and no idea where she came from.

As a wildlife documentary maker,Gwyneths work has taken her all over the world. But when she has a terrible accident in the remote Scottish Highlands, she is saved by the McClusky family and taken into their home.

However, there is more to this family than meets the eye, and a long-held secret is threatening to tear them apart. Amber and Gwyneth are at the beginning of a journey that will change each of their lives forever

This was a book that was set up to be an absorbing rollercoaster of a read, but failed to fully deliver on its initial promise. The beginning was high on intrigue and I was excited to see where it would lead, but after multiple timelines, characters, and settings are introduced, the final outcome was a bit on the underwhelming side.

There were a number of positive aspects along the way, as the engaging writing touched upon many interesting themes and weaved together a decent family drama, while the characters were all very well developed. However, there was relatively little that I found genuinely compelling, and even a twist at the end did not leave a lasting impact.

The book is set over a 20-year time span. In late 2009, Amber is preparing for the Christmas market at her seaside gift shop in the South of England, when she sees a teenage girl walking alone and aimlessly along the beach. The girl has no memory of who she is, what happened to her, and how she got there, so Amber accompanies her to hospital.

We then go back to 1989, where wildlife documentary maker Gwyneth is filming a ptarmigan when she falls into an icy lake in the Scottish Highlands. She is rescued by a man called Dylan, and the two immediately share a physical attraction to one another, so Gwyneth eventually agrees to stay for Christmas with his family at an impressive lodge set between idyllic, snow-topped mountains.

In the years that follow, the two occasionally meet, and it turns out that Gwyneth is keeping secrets about her present and her past. She has not seen her parents since she was fourteen and will not tell anybody why. Meanwhile, Amber continues to help the lost girl regain her memories, eloping from the hospital together in the process.

Both of the storylines are told in the first person, from the perspectives of Amber and Gwyneth respectively. It is easy to tell where some of the story is going before the halfway mark, but other questions remain through to the end. More of the narrative follows Gwyneth, which was a slight shame because I much preferred the chapters told by Amber.

The reason for this is that Amber is simply a much more likeable character. She carries a lot of upset from her past, but she is strong-willed and adventurous, as well as very caring. The growing bond she develops with the girl is one of my favourite things about the book, and I also liked her mother and aunt, who were both entertaining to read.

On the other hand, I could just never warm to Gwyneth, whose relationship with Dylan became rather tiresome. While undoubtedly driven and determined, I found her overly selfish, and the ultimate revelation about why she left her parents behind seemed a little contrived to me. Dylan also had a number of flaws – there is one part of the book where his actions defy even the faintest logic.

However, there were still several things to like in the past storyline. It introduced numerous characters and at first I was concerned that it would be hard to tell them apart, but they were all so well developed that this was not a problem. Mairi was particularly fascinating, and it becomes apparent that there is more than just the one family secret in this book.

The settings were also a high point throughout. The lodge in Scotland had an imposing and highly evocative atmosphere, and the hostile weather conditions emphasised its isolated and oppressive feel. Snow and ice was a constant theme, and part of the book is even set in Iceland, where the descriptions of the wildlife was very informative.

There are several themes discussed during the story, in particular those of motherhood and grief, and those are handled quite well even if they do verge on repetitive at times. The ending was the biggest letdown for me, as some aspects did not make sense in places, and it also hinged on an unlikely coincidence.

Overall, I had very mixed feelings with this book. There were parts that were wonderful to read and I loved the present day storyline with Amber, but I just think that in other areas it got a bit too bogged down and my lack of warmth towards Gwyneth and Dylan did affect things. Tracy Buchanan is a great author and this one is well written too, but it did not match the excellence of the two previous books I have read from her.

A book that had a relatively equal share of positive and negative aspects. One narrator was more engaging than the other, while the outcomes did not always match the strength of the premise.

One thought on “Book Review – The Family Secret by Tracy Buchanan”