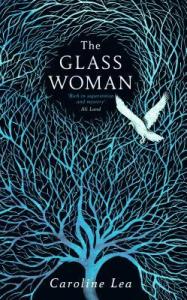 This was a buddy read with my friend Kriti, one which we pencilled in to our respective calendars as early as last November! We discussed the book at the end of each of the seven parts, taking turns to ask each other questions. It was a fun and insightful discussion, and I shall share some of it later in the post.

Iceland, 1686. Betrothed unexpectedly to Jón Eiríksson, Rósa is sent to join her new husband in the remote village of Stykkishólmur. Here, the villagers are wary of outsiders.

But Rósa harbours her own suspicions. Her husband buried his first wife alone in the dead of night. He will not talk of it. Instead he gives her a small glass figurine. She does not know what it signifies.

The villagers mistrust them both. Dark threats are whispered. There is an evil here – Rósa can feel it. Is it her husband, the villagers – or the land itself?

Alone and far from home, Rósa sees the darkness coming. She fears she will be its next victim…

This book provided a classic example of a plot which did not quite match the quality of the writing. A highly suspenseful read that carried a haunting sense of atmosphere throughout courtesy of a unique and treacherous setting, the story initially presented a series of fascinating mysteries only to become increasingly convoluted as the end grew nearer.

The introduction of the oppressive Icelandic landscape and complex, multi-layered characters made the opening chapters exciting and immersive, embellished by some interesting themes. Everything seemed to be in place for it to be an outstanding historical fiction, but somewhere along the line it just lost its way amid various narratives and plot strands.

A young woman from the village of Skalholt, Rosa is betrothed to Jon Eiriksson, who is the chieftain of the settlement of Stykkishólmur. When she leaves her family and friends behind to join her new husband, she immediately feels panicked and isolated in a place that does not welcome outsiders with open arms.

Jon is evasive and enigmatic, not allowing her to mix with the other villagers and rarely showing her any affection other than giving her a small glass figurine of a woman. He leaves Rosa alone in their croft for long periods of time, and she begins to hear strange noises from the attic she has been prevented from entering, which causes her to fear for her sanity.

Meanwhile, she also suspects Jon over the death of his first wife Anna, who was apparently buried in secret. The mystery of what happened to Anna leaves Rosa constantly perturbed by doubt, as Jon refuses to discuss the matter and gossip reigns across the village. There is also talk of witchcraft, at a time where women being able to read and write was seen as irregular.

The majority of the story is told in the third person from Rosa’s perspective. The first half of the book is all about her anxiety and terror, which is emphasised by a creepy and sinister atmosphere that radiates from the page and grips you with both hands. She is a likeable and spirited character, and I appreciated the way she developed into someone more assertive later on as events transpired.

In part three, we have the addition of a new timeline set two months in the future, told by Jon in the first person. This made for more engaging writing and gave the story a new dynamic by giving an interesting insight into Jon’s true nature, but its execution led things to become slightly over-complicated.

Jon was a tricky character to work out at first, as there were many sides to his personality. His words contained hidden messages and his motives were unclear. The same could be said about his companion Petur, who came across as fierce and intimidating. It always felt like he too had something to hide.

The many intriguing questions that arose along the way promised a dramatic and tense conclusion, but that never really materialised. I was left underwhelmed at how some of the important plot points were resolved, although I could certainly appreciate the underlying themes and messages that the author attempted to convey, such as forbidden love.

Furthermore, the concept of witchcraft was not explored in enough depth, although I really liked how the book used inspiration from the ancient Sagas to give it a very distinct feel. The historical context was very well realised, creating an interesting and informative portrayal of seventeenth century Iceland.

Undoubtedly the biggest strength of this book was the writing. It was incredibly descriptive and filled with tension and foreboding, and that more than compensated for the relatively slow pace. Much of it is driven by the setting, which is synonymous with the story and provides the basis for numerous metaphors and analogies that are evident right from the beginning.

While the ending was fitting to an extent, it did not fulfil the promise of the early part of the book. It is hard to pinpoint where exactly things began to go wrong, but as the two storylines converged the story lost its fluidity, and the answers to the mysteries were not as breathtaking as I hoped or anticipated. The glass woman itself is actually fairly irrelevant to plot, instead playing more of a symbolic role. Some aspects of the plot were similar to The Miniaturist.

Overall, this is a book that laid impressive foundations with fabulous writing and an extremely tense and claustrophobic atmosphere, as well as a succession of clues that pointed towards an intriguing mystery. However, it became weighed down by a plot that gradually became more convoluted, and as such the ending was something of a letdown.

Here are some of the excerpts of my discussions with Kriti as we read The Glass Woman. There may be some minor spoilers.

Kriti: Stephen, what drew you to this book?

Stephen: First of all, I was very intrigued by the synopsis. The concept of witch trials and the promise of a mystery both caught my eye, and having enjoyed a number of books that take place in historical settings, I felt it was an ideal read for me.

I was further convinced to read it by positive reviews from other book bloggers, and of course the cover is very pretty, too!

How about you? What has made you excited to read this book?

KK: The synopsis was quite intriguing for sure. I don’t go out of my way to find reads about different cultures and when you mentioned this, I was convinced it was a great learning opportunity about the Icelandic people. Witches have not featured in my reading list much either though I enjoyed The Furies immensely last year. It was a spooky read.

SD: The first thing that struck me about the book was that it is written with such a degree of atmosphere, with lots of metaphorical descriptions of the Icelandic landscape. Have you found the writing engaging, and what do you think that has brought to the story?

KK: It reminds me of Station Eleven and the atmospheric writing there. The world set up is done through the medium of references to Sagas and the wind and the time of day are described a lot too. It has taken some getting used to but I am enjoying it. The writing has created a sense of mystery and suspense.

SD: I am finding this book relatively slow-paced, but also quite gripping. When Rosa is alone in the croft and hearing sounds, it creates a very creepy and haunting atmosphere. It makes the whole setting feel claustrophobic. How are you finding these aspects of the book so far?

KK: I agree – they have a claustrophobic feel to them and the fact that Rosa is sort of stuck in the marriage and dissuaded from interacting with other people adds to the tension in the room. It’s an interesting way of showing her struggles. The places in the plot where she feels like she is being watched at night are super creepy.

Rosa is more educated than most people and yet, she still ends up in a marriage where she seems to be under constraints. That speaks to the year that this book is set in but I also think there is a connection to the glass woman. What are your thoughts?

SD: I certainly think the dynamics of Rosa’s marriage reflects the time period in which this book is set, although the constraints are still quite extreme. I must admit that I really not sure yet about what the connection to the glass woman might be. Jon was the one who gave it to her, so perhaps there is a story associated with it?

KK: Through Jon, we are learning about his relationship with Petur and we also got a glimpse into Anna’s story. She wanted a child and Jon couldn’t give that to her and it seems like they had a big fight and things didn’t go well. As Jon says at the end of Part 4, “But every time I think of our last fierce struggle, I feel sickened.” Any speculation on what happened?

SD: Jon’s account is becoming increasingly fascinating. It strongly suggests that Jon killed her, but it does not say how, or whether that was what he intended. That could be significant.

SD: The writing is good, but I feel like the plot is at risk of becoming slightly convoluted. Do you agree, Kriti?

KK: Absolutely, Stephen! Jon’s narrative is always complicated with being back and forth and different from Rosa’s and I fear that will get more convoluted now that the timelines are coming together.

SD: While I enjoyed the book, I feel like it promised so much more. Early on there were a lot of mysteries and the creepy atmosphere suggested a really powerful conclusion, but as we said before it felt a bit convoluted and perhaps even a little underwhelming? Do you feel the same way, Kriti?

KK: Agreed 100%, Stephen. The writing was good. I loved the atmospheric and chilly feeling I got at times but things got really convoluted and I don’t quite understand why. Since I was reading on Kindle and I can see what other readers highlighted in the book, the quotes seemed to be about forbidden love. Do you think that was one of the themes this book tried to address?

SD: I was having exactly the same thoughts about forbidden love when I got close to the end of the book. I think that was definitely a theme, and the success of its execution was quite mixed.

What were your overall thoughts on the book? I thought the writing was very good, and it brings an excellent sense of place with a suitably haunting atmosphere, while Rosa is a good protagonist. But I was slightly disappointed by the way the plot became slightly over complicated, particularly after Jon’s point of view was introduced. I would perhaps say a three-star read for me.

I think the second half of the book was more engaging since the groundwork was done but it was definitely more complicated. I wanted more about the glass woman and maybe that should have been the witchcraft angle. It’s a three star for me too. If the writing wasn’t good, it won’t have been a three.

Born in Jersey and with a degree in English Literature and Creative Writing from Warwick University, Caroline Lea had her poetry published in several anthologies before turning her hand to novels. Her first novel, When The Sky Fell Apart, was released in 2016, followed by The Glass Woman three years later.

A book that is very well written throughout but with a plot that fails to truly ignite despite lots of initial promise.