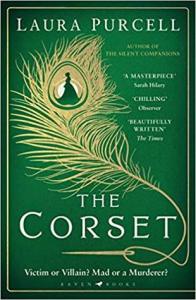 This was a buddy read with my friend Pauliina. I am very grateful to her as she engages in such thoughtful discussion, and makes me look upon a book from a slightly different perspective. I really enjoyed reading this one with her and we both liked the book, which is even better.

When Dorothea’s charitable work leads her to Oakgate Prison, she is delighted with the chance to explore her fascination with phrenology and test her hypothesis that the shape of a person’s skull can cast a light on their darkest crimes. But when she meets teenage seamstress Ruth, she is faced with another theory: that it is possible to kill with a needle and thread. For Ruth attributes her crimes to a supernatural power inherent in her stitches.

The story Ruth has to tell of her deadly creations – of bitterness and betrayal, of death and dresses – will shake Dorothea’s belief in rationality, and the power of redemption.

Can Ruth be trusted? Is she mad, or a murderer?

It takes a special kind of book to make me feel completely and utterly immersed from literally the very first page, but The Corset falls right into that relatively exclusive category. An impeccably written and often thrilling story laden with clever ideas and plot twists, I found it a compelling read right up until the last, breathtaking sentence.

As a historical fiction it hits all the right notes, but it is accompanied by a dark and gripping plot that is impressively constructed, yet steeped in tragedy. Among the many concepts explored in the book is magical realism, which as a storytelling device can sometimes split opinion, but here it is done to absolute unqualified perfection.

It all begins with Dorothea, a young lady who volunteers her support to the female inmates at Oakgate prison and practices phrenology, an imprecise science which she uses to try and determine whether these women were born to commit the most serious crimes. But then she meets 16-year-old Ruth Butterham, who is accused of murder and has a most intriguing story.

Ruth tells of how she stopped attending school after being singled out by those of a higher social class, and stays at home where she is taught by her mother to become a seamstress. She displays a natural talent and soon takes over her mother’s work, while secretly crafting a new corset that acts as a kind of armour against her fears and insecurities.

But her ability as a seamstress eventually starts to terrify Ruth, who suspects a connection between her work and a sequence of tragic events. She is forced to leave home and become an apprentice for the tyrannical Mrs Metyard, where we learn of her upsetting experience and how she came to be in prison, due to be sentenced to death.

The book is told from the separate perspectives of both Dorothea and Ruth, and though they had a different tone, I thought they complimented each other well. That being said, of the two I felt much more invested in Ruth’s storyline, which was sad and relentlessly fascinating. The absorbing quality of the writing here helped me develop an emotional connection to it.

There is also plenty of intrigue to be found in Dorothea’s POV, in the way she reacts to Ruth’s story and how it completely differs from her existing thoughts on phrenology. The writing here is very flowery and descriptive, which I loved. However, it is an area of the book where I also had some issues.

At times, I felt that elements of Dorothea’s narrative were providing a distraction from the main plot. There was also the occasional passage that seemed to be there solely for the reader’s benefit, with information that could have been relayed in a different way. The major revelation finally arrives and that leads to a dramatic ending, but I would have preferred that strand of the story to be introduced much sooner.

I was immediately taken by the unique concept of phrenology and the role it played in the book. It brought an extremely interesting new angle and Dorothea’s enthusiasm for it was as infectious for me as it was off-putting for her potential suitors. It would have been great had the topic been explored even more, but I understand that this may have harmed the pacing.

Ruth was my favourite character. Her story is a sad and affecting one, but also one that had me clinging to every word. The vividness of the writing often made it feel like I was there with Ruth as she recounts her life to Dorothea, yet a sense of mystery persists throughout which makes you question if she is telling the whole truth.

It is through Dorothea that these doubts come to the surface, and I found her to be a very strong-willed female character. Undoubtedly the most complex character in the book is Mrs Metyard’s daughter Kate, who turns out to be a lot more than what she originally seems, while the same can be said about one or two others, especially if you fail to grasp the subtlest of hints along the way.

The book captures a dark and unforgiving depiction of Victorian England, which I thought not only matched the atmosphere and tone, but also provided the story with a kind of gritty realism. Settings such as the debtors prison and Mrs Metyard’s shop were effortlessly made to seem full of oppression and despair.

Another thing that reflects the setting and the time period perfectly is the writing style. To say I absolutely adored the writing would be an understatement; in fact it is easily one of the best I have ever come across. Laura Purcell writes with such eloquence and refinement, and at the same time weaves together a plot that never ceases to hold your attention.

The final few chapters are incredibly gripping, and it was difficult to tear my eyes away from the pages. There were major twists that I did not see coming, and the ending itself was such a clever, jaw-dropping moment that left me a little bit speechless. I had to reread it twice for it to truly sink in!

Overall, this is a thoroughly captivating and phenomenally written story with a plot that keeps you guessing and yields unexpected surprises. I was entirely consumed by Ruth and all the intriguing concepts and magical realism. There may have been some problems with Dorothea’s storyline, but make no mistake, this is an excellent read.

A former bookseller, Laura Purcell began as an author in 2012 with a series of books about Georgian queens, but put that project on hold to concentrate on writing Gothic novels.

The first of them, The Silent Companions, was published in 2017 and won the WHSmith Thumping Good Read Award. Then came The Corset, and that was followed by Bone China in 2019. Her next book is due to be released later in 2020.

A highly accomplished book with a style of writing that I could only aspire to, there are many thrills to be had in The Corset, and I now cannot wait to read more from Laura Purcell.

35 thoughts on “Book Review – The Corset by Laura Purcell”